Instead of focusing on wine tasting as some sort of elaborate, rigid routine fraught with ritual and stern judgement, wouldn’t it be nice if someone could just break it down for you via a few simple rules that maximize pleasure and learning while minimizing angst and consternation? I was witness to just that when, as an invited media guest at the Taste of Tulalip, I attended Anthony Giglio’s guided seminar on the wines of the Rhone versus the wines of Washington. This wasn’t a “smackdown” per se. More like, as Tulalip Resort Casino Sommelier Tommy Thompson stated, a “pillow fight“. In other words, no puffing out of the chests, rather an informal, good time. (Pajamas optional.)

I was really impressed with Giglio’s presentation. I met him at a lunch in New York in 2011 but hadn’t had a chance to witness Giglio in front of an audience as an educator. And an entertainer. In fact, the seminar started with some autobiographical material about growing up in a house where three generations of his Italian family lived. (At the same time.)

And at this home, wine was a part of every meal. (Though it was a “red wine with everything” kind of household.) Giglio told tales of the “Spaghetti Spritzer”: red wine and cream soda. Even if you weren’t into wine at all–though it would be weird if you felt that way and attended a wine seminar– you’d probably be highly amused by Giglio’s presentation. But back to the wine tasting. Here’s what I learned from Anthony Giglio:

Maybe you just had some coffee or a bunch of Oreos, I don’t know. But the first sip of any wine can be jarring. Though the saying goes, “You never get a second chance to make a first impression”, at a wine tasting you have the luxury of multiple chances with each glass. Along those lines:

2) “Take three sips of wine before you throw it overboard.”

We discussed the first. For sip number two, you’re getting back in there and recalibrating from the shock of the first. The third sip? That’s the one where you can get all judge-y on the wine. But perhaps you are still non-plussed. Time for some food:

A wine (red or white) may just be too aggressive, a bit unbalanced on its own. But something magical can happen when it shares space on your palate with something salty and fatty. Potato chips would be the classic go-to. Or maybe a well-charred and marbled ribeye with some coarse sea salt.

Now let’s shift gears and head to the NHL:

Like a squeeze of lemon over a piece of fish, acidity in wine is what cleanses and smooths things out a bit, getting you ready for that next wine power play.

PREACH IT! The best way to learn about wine is to try as much of it as possible. Preferably when you don’t have to pay for it. Take every opportunity you have to attend tastings at a local wine shop. Just remember you don’t have to drink everything you try; the spit bucket is your friend. Oh, and about the wines we tasted: Some big-time heavy hitters. I was blown away that we were going to sample Chapoutier’s Hermitage “L’Ermite”. White wines from the Northern Rhone, especially the all-Marsanne versions from Hermitage, are some of the world’s best. This 2007 was still super young and more golden than King Midas.

This wine “pillow fight” was a great opportunity to understand the grapes of the Rhone (both Northern and Southern) and see how they are interpreted in the Old World (France) and the New World (Washington State).

The rest of the activities at the Taste of Tulalip were equally impressive. I was gobsmacked by the two rooms hosting “Magnum Parties”, where wines I never expected to sniff in my life were there for me to savor. (The vast majority poured from magnum.) Back vintages of Red and White Bordeaux, Hermitage Rouge and Blanc, Penfold’s Grange, Opus One, and so much more. Whoa! Even this rare jewel: Krug Clos du Mensil 2000. Aka “Magical Dream-Maker”. 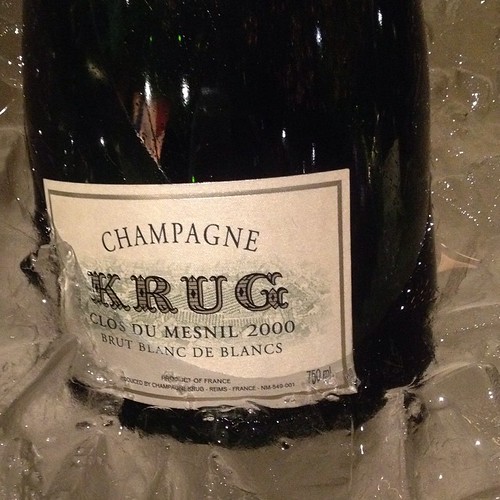 There was also a ginormous room of Washington wines, a wide hallway with international bottles, and a room full of California and Oregon wines. I even got to attend a seminar with famed California Pinot Noir producer Michael Browne of Kosta Browne. He regaled us with tales of being in a youth circus in Eastern Washington (!), which, naturally, led him towards a life in wine. (Huh?)

All of these experiences can be purchased separately. The All-Access Pass is the way to go, though if you just want to spring for the Grand Taste you’d be getting beyond your money’s worth. Either way, I highly recommend you book a room at the hotel or get a designated driver.

As far as the caliber of wines, their rarity and abundance, I was mightily impressed with Taste of Tulalip. Every wine geek should mark their calendars for next year’s event. And sign up for a seminar with Anthony Giglio.

Look for me by the Krug.