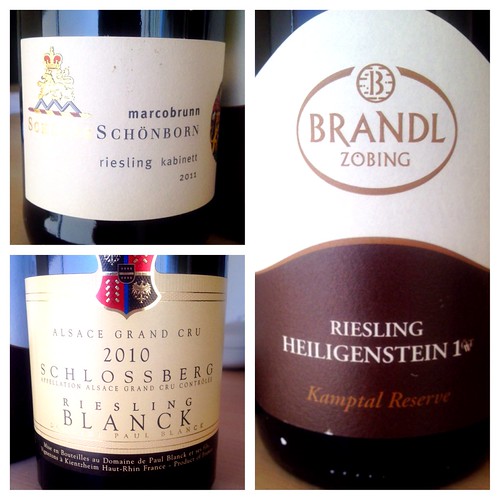 Can we send you three bottles of Riesling? Uh, YOU BET! Three samples of the Best White Wine on Earth arrived for my consideration and, specifically, for a twitter tasting known as #winechat that takes place every Thursday from 6-7pm PST.

What did I have to say about the three of them? To the Twitters!

My favorite of the night was the Brandl:

Note that the Schloss Schönborn is low in alcohol and has some zip to it. Perfect brunch/late morning wine. Or after mowing the lawn on a hot day. Or in lieu of lawn-mowing.

What about the entry from Alsace?

Blanck is really good but you don’t know you’re going to get that sweetness until you open it. #winechat

I continue to be stymied by Alsatian Rieslings (and the region’s whites in general) for this reason. This is a much richer version of Riesling; serious stuff you could put in the cellar.

Want more of The Riesling Story? Check out my interview with author Stuart Pigott on Grape Collective.

A note on glassware: I was sent two wine glasses (the “StandArt” and “Gold Edition”) by Gabriel-Glas, which I first took for a spin during this tasting. Usually I’m a jelly-jar type of wine drinkin’ guy, but was impressed with the modern shape of Gabriel-Glas’ well-designed bowl. The mouth-blown Gold Edition is astonishingly light. Like featherweight; I couldn’t stop holding it and waving it about. (Sans wine for safety, naturally.) The StandArt is machine-molded and heavier, but no heavyweight. Both are intended to be a universal glass (as in, you don’t need another); the StandArt goes for $29, the Gold Edition for $55. I’m really enjoying drinking out of both of them on a regular basis. Have a look: Find out what Ben Carter thought about these Rieslings (and the Thirty Years’ War) on Benito’s Wine Reviews.