I’m going back in the time machine and rounding up some of my top Thanksgiving wine posts as well as taking a trip around the blog-o-sphere to see what my fellow scribes have historically opined about when it comes to the most venerated of American eating and drinking holidays. Let’s do this! Starting with me, of course. 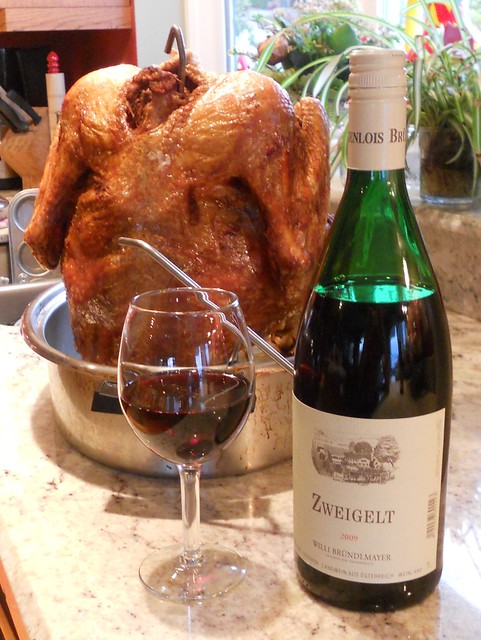 I also highly recommend a big 1L bottle of Zweigelt, Austria’s signature red grape. Pair it with deep fried turkey and not burning down the house.

Foodista fueled a pumpkin kick, pairing wine with vegetarian savory and sweet recipes involving the festive orange gourd. I also had a trio of under $10 picks as well.

Need a vegan Thanksgiving dessert? I highly recommend a surprisingly sweet and parsnip pie that also makes an incredible breakfast. (Paired with a spirited apple wine. Oh, and never mind that turkey carcass over to the right….)

Thanksgiving without rosé? No way. Try this pink wine with an unusual blend.

Head back to 2008, where I sung the praises of two South African wines from Mulderbosch. (I still recommend these wines.)

Whoa, let’s go back to 2006, when I was more fixated on gratuitously putting swears in my blog posts, saying “for reals”, and apparently drinking everything in site. I do recall there was a tragic amount of corked Champagne.

But enough about me. Especially because I’m afraid what I’ll find if I look back further in the history of my blog. Let’s check on other bloggers. Cue Kenny Rogers “Through The Years”:

Meg of Maker’s Table dives deep. And if all that information freaks you out a bit, don’t fear. She concludes, “After all, Thanksgiving is not really about the wine, but it is—consummately—about tradition.” (2013)

Jeremy Parzen of Do Bianchi warms the heart of this former retail wine pro with his “10 Things Your Mother Didn’t Teach You About Thanksgiving Wines“. (2014) Especially point #2: Trust your salesperson. He explains:

“No one ever got rich working in a wine shop. People who work in wine shops are generally passionate about wine, food, and conviviality. And they’re generally nice people who care more about eating and drinking well than making money. Yes, it’s true that some will try to ‘upsell’ you. But, for the most part, wine salespeople just want you to go home with a bottle of wine that you’ll like. Treat your salesperson politely and respectfully and you will be rewarded in kind.”

W. Blake Gray of The Gray Report is adamant about drinking American wine on Thanksgiving. (2013) And also took umbrage at Eric Asimov’s European-heavy suggestions. (They duke it out a bit on Twitter.) Blake reasons that if “…Thanksgiving means something to you beyond football and shopping, I don’t see how you can separate the land from its bounty.”

Mary Cressler of Vindulge is smoking a turkey and drinking bubbles. (2009, updated 2013) “I always begin any dinner or event (whether Thanksgiving, a holiday party, or brunch) with sparkling wine,” Mary says. Can you understand why I like her?

Frank Morgan from Drink What You Like beats the local drum, choosing a red blend from Virginia to enjoy with his turkey. (2008)

Fredric Koeppel over at Bigger Than Your Head goes unusual, with an Auxerrois from Oregon. (2013)

Head to WineOhTV where Monique Soltani reveals (surprisingly) a sweet wine for turkey. And nails the pronunciation of “aperitif”. (2013)

Sean Sullivan of Washington Wine Report advises steering clear of red wines with big oak or tannins. He deadpans, “No need to kill the turkey twice.” (2013)

Clive Pursehouse from Northwest Wine Anthem has a trio of, wait for it, Northwest wines. Also, he posted this at 6:04am. Dude’s up early, probably because his handsome regimen is rigorous. Or because he’s a father. (2013)

What does a Wine Harlot drink? First Nanette Eaton quotes Tolstoy, then moves on to suggest Vouvray among other things. And leaves you with this advice: “No matter what adult beverage you bring, make sure you bring an ample supply, the Wine Harlots motto is ‘excess is best.'” (2012)

Melanie Bianco Ofenloch, aka the Dallas Wine Chick, packs up 18 bottles of wine for her family’s enjoyment. I have one word for that: hero. (2012)

Considering brining with wine? Grapefriend’s Alyssa Vitrano has four words for you (and Martha Stewart): SAVE WINE; DON’T BRINE. (2013)

Although blogging in 2014, Aaron Nix-Gomez of Hogshead unearths an ad for Gold Seal Champagne from 1912. It features a smartly dressed woman with a coupe in one hand and a the reins of a giant turkey (which she is atop) in the other. And an axe-wielding airborne cherub ready to behead said giant fowl. So yeah, it’s pretty amazing.

Joe Herrig of Suburban Wino almost didn’t get to enjoy Thanksgiving in 2010 due to a sinus infection. But a doctor offered him two shots. What was going through Joe’s head? “Two fleeting pin pricks in exchange for rich, meaty mouthfuls of drumstick; buttery, fluffy potatoes; a nose full of cranberries in a fresh glass of Brouilly; the honeyed nectar that is slightly-chilled Sauternes, served with a slice of warm apple pie…” What happened next? “Needless to say, my pants were around my ankles. A shot of cortisone in the left cheek, and a shot of antibiotics in the right….24 hours later, I was on the mend, and digging into a 3-day bender of Crestor-ic proportions.” He even made a video. Not of getting the shots…. (Excellent use of “Roly Poly” by Bob Willis and His Texas Playboys, BTW.)

Alfonso Cevola of On The Wine Trail in Italy takes us back to Thanksgiving in 1976. He had an amazing mustache. He discovered the wines of Ridge. And tells what it’s like to have worked Thanksgiving Day at a restaurant full of wealthy conservative types lamenting the election of Jimmy Carter. It’s a very thoughtful rumination on family. (2011)

One more trip via the wine blogger wayback machine (vintage 2008) , Alder Yarrow at Vinography penned the provocatively titled “Stop The Thanksgiving Wine Recommendations!“. But lest you think him a wine curmudgeon (there is only one Wine Curmudgeon, Jeff Siegel), his post ends on a fine note:

Finally, Elaine Chukan Brown from Hawk Wakawaka Wine Reviews recommends not a bottle but that we all be grateful. I also learned about the genesis of her love of, and for, pie. As well as her childhood furniture-rearranging habit. (2012)