One of the signs of a great producer is their more humble offerings are as an impressive achievement as the top wines commanding well-deserved and earned prestige along with a concordant price.

Case in point? One of my favorite wineries for Barolo: Massolino. Barolo, as well as Barbaresco, is tucked up among the particularly prestigious parcels of Piedmont in the northwest corner of Italy.

What’s the difference between Barolo and Barbaresco? Find out.

But rather than a place (like these two heralded addresses I just mentioned), let’s talk about something else from Piedmont that stars with a “B”: a grape, Barbera. I recently enjoyed the 2012 Massolino Barbera d’Alba at Seattle’s Staple and Fancy and it was a knockout. A pure and elegant red with a combination of being easy to drink yet hard to forget. Though not a Barolo (which is made from a different grape, Nebbiolo), the Massolino Barbera provided a window into what a great producer can craft even in a sub-$20* wine.

The dish I most enjoyed with this wine was notable not for what it had but for what it didn’t: meat. I was invited to a media dinner sponsored by Quorn, a meat alternative. What’s in it? How is it made? I turn to their website:

The main constituent of Quorn™, Mycoprotein, is a naturally occurring, high quality, healthy form of protein. Quorn™ is produced using a fermentation process very similar to brewing; only we harvest the solid as opposed to the liquid.

The mycoprotein in Quorn is converted from “a tiny member of the fungi family”. 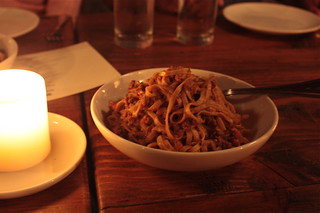 While there was Quorn in both nugget and patty form, the most successful integration of this product into a dish came via tagliarini made with a a ragù of Quorn grounds, marscarpone cheese, and mint. The grounds integrated seamlessly into the dish, pulled together by the creamy cheese and enlivened with mint. The latter ingredient perked up herbal notes in the wine, too.

This is not the first time I’ve sung the praise of a Barolo producer also making a knock-out Barbera. Though more expensive and with an eye on longer-term drinking, get to know Giacomo Conterno’s Cascina Francia Barbera d’Alba. I enjoyed a 2004 earlier this year and dubbed it “one of the most fantastically delicious and surprising bottles of red wine in ages.” Discover why.

*Average retail price on WineSearcher is $19.