A Review of FOOD: Transforming the American Table 1950-2000 at the Smithsonian 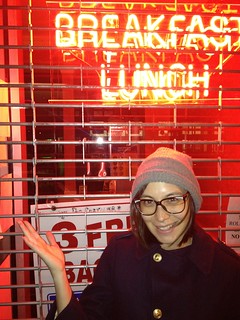 Strolling around the Smithsonian and reviewing exhibits like FOOD: Transforming the American Table 1950-2000 at the National Museum of American History (NMAH) certainly piques my interest. But living in Seattle makes traveling to the nation’s capitol to indulge my interest in food history inconvenient. So I turned to East Coast Correspondent Jennifer Schneider. She’s the first person EVER to guest post on this blog, after 8+ years and 558 posts. And with the talent, wit, critical eye, and depth of thought displayed in this post, I couldn’t be happier to turn over post 559 to her. (Full disclosure: I’m tired.) And though well-versed in the life and times of Jennifer, you might like to know a little bit about her. She was kind enough to provide this short biography:

Jennifer Schneider accidentally stabbed Jameson Fink in the arm sometime in the winter of 2007. They were making a celery gratin, talking animatedly about food and wine, and not watching themselves carefully enough. They have continued their friendship over dinners and other violent crimes. She lives in New York.

And now she’s taking over the blog. Her review follows: 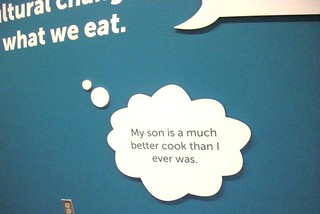 The National Museum of American History’s newest exhibit, FOOD, strives to document the complexity of our diet and food culture. Part of the Smithsonian, the NMAH is accessible and family-friendly with bright colors and busy layout – think more Air and Space Museum than the National Galleries. And yet, while the exhibit takes no sides on food debates throughout history, an argument is buried deep in there between coffee lids and bake-off posters. 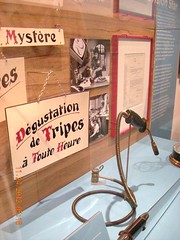 The crux of FOOD is Julia Child’s kitchen, imported with every detail intact from Cambridge, MA. The famous home chef’s books, canisters, and appliances sit behind glass walls with assorted trivia posted about her life. Large, almost impossible collections of copper pots and pans, doughnut-hole punches, blow torches, and Parisian menu boards hang around the periphery of the kitchen, along with a television screen showing classic PBS episodes of Julia Child’s various shows. The overall effect is charming, slightly crave-inducing, and a little nostalgic; under the Wine Atlas of the World on her bookcase is the Boston phone book, reminding you that this could have been any matron’s home kitchen.

But the procurements from the Child estate are just one part of the FOOD exhibit. Mini-exhibits fill the rest of space, concentrating on “transformations” of the American table. One showcases products from ethnic grocery stores, another displays the influence of Mexican food, and yet another illustrates the evolution of the Backyard BBQ. What I found really interesting, though, was our enamor with snacks and convenience. 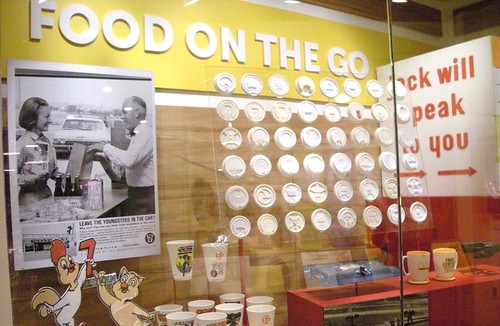 Just that morning, I’d sat in my car listening to an author on NPR saying that 1 billion people in the world are starving, and 1.5 billion people in the world are obese. He called it something like massive irony, and said that people who are both cash-poor and time-poor mostly patronize the Drive-Thru and eat in their laps. Although the NMAH doesn’t present this part of our history as a massive irony, it certainly winks in that direction.

Paired with FOOD (hee hee) is a complimentary exhibit on American wine (ha ha), with a historical apology about American wine having to completely reset after prohibition, losing generational knowledge in the process. What follows is a glossy overview of Gallo’s contributions to viticulture, with a couple other large producers thrown in for good measure.

And that brings me back to what Julia Child’s kitchen could possibly mean to an American consumer now, in 2012. (Please note that FOOD only covers gastro-advances 1950-2000, so 4Loko and Bud Lime-a-rita will have to be independently researched.) The curators take care to point out Julia Child’s extraordinary height and travels and beliefs, but next to plexiglass displays of Frito-pie and Pringles, it seems extraordinary that a hulking Francophile became a television star. No matter what else can be speculated about Julia Child, she used her kitchen and ate the food she prepared, wasted little and contributed much. In those respects, she was excellent.

Instead of romanticizing America’s love affair with food, this exhibit traces a more realistic line of our diet that often falls well below “excellent” and sometimes floats just above “starvation.” FOOD, the exhibit, is about the transformation of the American table, but food (the stuff we eat), is about transforming us: from skinny to fat, from miserably sitting around a table to happily eating alone in a car, from expecting women to be home cooks to sharing that burden with men, from mindlessly consuming to being aware of the origins of our food. The Smithsonian hasn’t made a perfect exhibit, but it’s entertaining and easily digestible (last one, I promise!), and, hopefully, a conversation-starter.