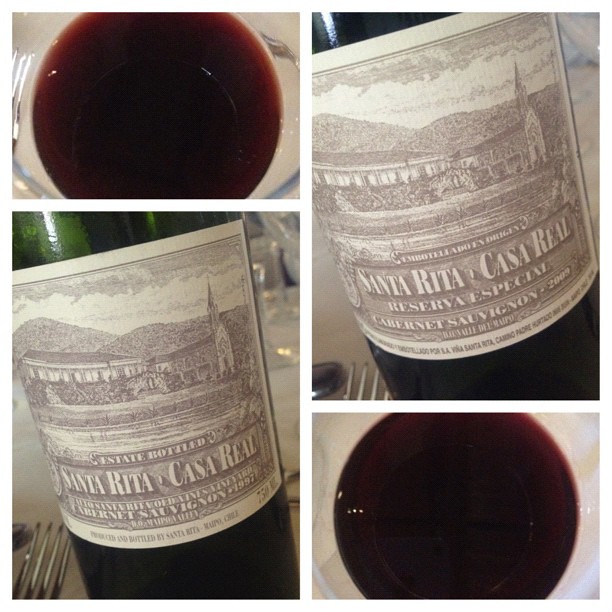 How do Chilean red wines age? I must profess ignorance as the bulk of my experience revolves around wines crafted for enjoyment now, or big bruisers who need to take a long nap in the cellar. This situation, however, was recently remedied as I just tried a 1997 Santa Rita Casa Real Cabernet Sauvignon at the winery while on a trip with a group of bloggers sponsored by Wines of Chile. We dropped some not-so-subtle hints that we sure would like to try a Chilean red wine with some age on it, and our brashness was rewarded with more grace than maybe we probably deserved. (I’m exaggerating. We asked nicely and respectfully.)

If you peek at the upper left quadrant of the photo above, it’s a bird’s-eye view of the 1997 in the glass. We tried it side-by-side with the youthfull 2009, shown in the lower right-hand corner. You can kind of see the outer rim of the circle of the 1997 starting to fade a little, showing a touch of brown. But it was a wine very much alive, with lots of freshness. I would compare it to a well-aged, old-school Bordeaux.

How about that 2009? I don’t want it to feel left out, after all. I was surprised at how smooth it was drinking; it had to have been decanted for quite a while. Both wines were a testament to the quality of Chilean wines past and present. And bode well for the future.

And I can’t talk about Santa Rita without talking about Casa Real. The namesake of Santa Rita’s iconic Cabernet is a home which now operates as a space (and hotel) for private events. Casa Real has a garden of breathtaking beauty and inspiring detail. It’s the kind of place you want to park yourself for hours, and quietly contemplate life and/or get lost in a book. Preferably with some wine. 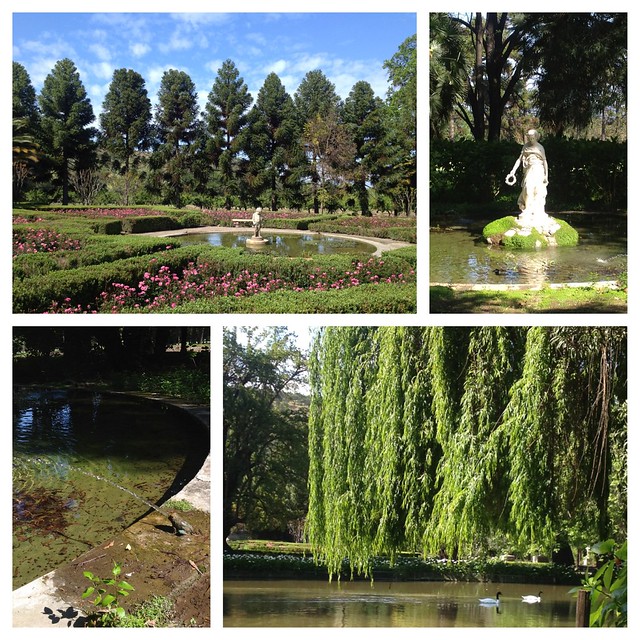 There is also a fine restaurant for lunch and a museum full of pre-Columbian artifacts.   Now, if you need me, I’ll either be by a fountain featuring frogs shooting water out of their mouths or watching the swans from a safe distance. Stop by and I’ll pour you a glass of Sauvignon Blanc.

You can peruse my photos from a visit with my Mom in 2009 on Flickr. Or take a look at a very roots-y Chilean scene. Or enjoy some sparkling rosé made from a grape you’ve probably never encountered in Chile or anywhere else.