Confronting Red Wine and Chocolate With Pleasure and Pocky 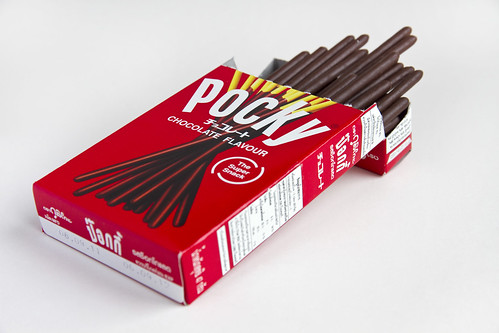 Tis the season for red wine and chocolate, what with the Valentine’s Day festivities upcoming. Not to be a wet blanket (which means I am going to be one), but I’m not particularly fond of red wine and chocolate. At all. Sweet wine? Yes. A porter or stout? Absolutely. For me, the sweetness of the chocolate just does not play nice with a dry red wine. Even the non-cloying, most artisanal, legit chocolate just doesn’t do it for me. But lest you think I am dogmatic and a slave to absolutes when it comes to wine, I bring forth this evidence in my favor from the Twitters:

Pocky and red wine pleases me.

I’d like to say it had something to do with a food and wine pairing epiphany, like the cookie (aka “biscuit stick”) mitigated the chocolate’s tendency to overwhelm the wine. But really it was just the end of a long day at work, and, returning home, I had a bottle of red wine handy (a Spanish wine made from the Monastrell grape…always a good bet for value. I love the Castaño) as well as a box of Pocky. A feast fit for a bachelor! I ate the whole damn box, then made the mistake of reading the ingredients. Not only were there a lot of tocopherols, which sound bad, but also interesterified sunflower oil, which sounds really bad. I think I googled “interesterified” and then tried to block the definition of it out of my brain.

The point is (Really? There’s a point to all this? Well, Pocky is pointed.) that taste is subjective, sometimes the palate, like the heart, wants what it wants, and there’s a place and a time (10:46pm December 21st, 2013) where pleasure is not something to be overworked in the mind but pursued without pause or pretense.