Dizzying Heights, Hairpin Curves, and The Vineyards of the Douro 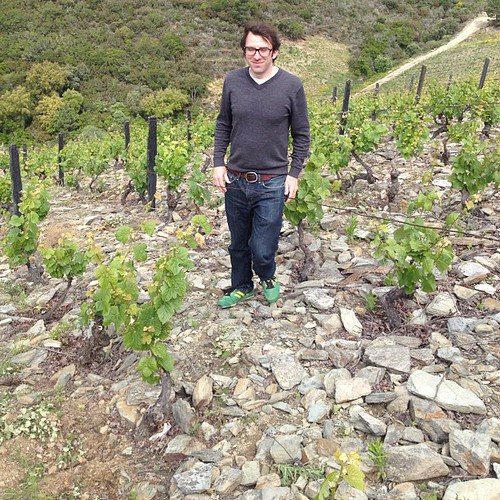 My pale and windblown look certainly had something to do with the journey to reach the top of one of the highest vineyards in the dramatic, and dramatically beautiful, Douro region of Portugal. While on a press trip as a guest of Esporão and visiting Quinta dos Murcas, we took a drive to visit the top of their vineyards. With the stinging notes of B.B. King in the background, Winemaker Luís Patrão swiftly navigated blind curves with no guard rail and wide enough for one car with ease and seemingly without a care in the world.

I’d also like to note that we did not slow down for each turn in case of traffic coming downhill; rather, Luis would just honk the horn as we approached every precariously blind corner to alert anyone of our oncoming presence. I couldn’t help but think, while I was white-knuckling whatever portion of the car I could grab a hold of, what if the car traveling downhill was coming across a curve at the same time and employed the exact same warning system?

Though I did start out the day looking sunnier and fresher. This beautiful view didn’t hurt my disposition, either: 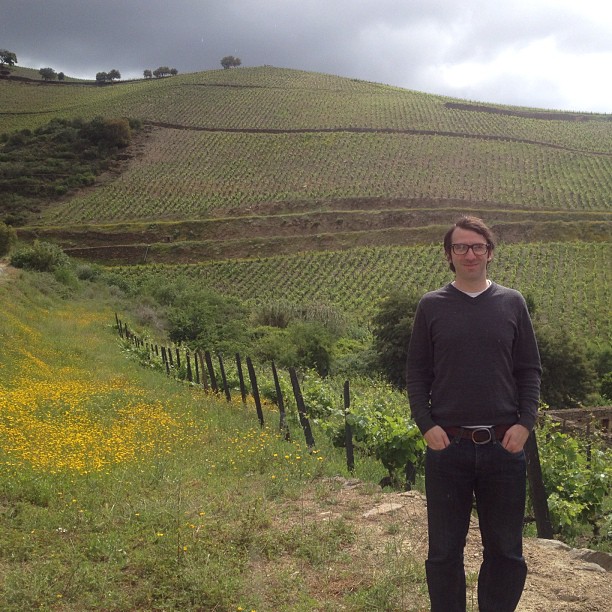 One unique aspect of the vineyards at Quinta dos Murcas is that, as you can see in the above two photos, is that the vineyards are not terraced but rather, planted vertically. The original owner was influenced by the steep vineyards flowing down into the Mosel river in Germany.

Quinta dos Murcas produces two wines (plus a very nice 10 Year Old Port): Assobio and a Reserva. The Assobio is a blend of Touriga Nacional, Tinta Roriz and Touriga Franca. (The top photo of a flushed me is from an old-vine Touriga Franca vineyard at a 400 meter elevation.) How does Luís describe each grape and it’s contribution to the final blend? Here’s what he had to say:

The Reserva is a selection of the best grapes from some of the oldest vines on the property; the grapes are foot-trodden in the traditional manner (“pisa a pé“) and the wine spends more time in oak than the Assobio. 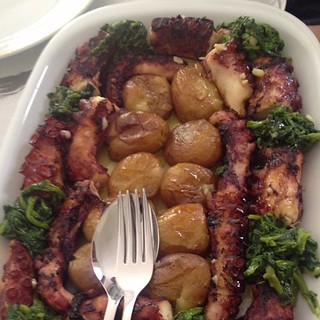 All that stress, guardrail-less exposure, and altitude sure made me hungry. And I was rewarded with one of the most perfect dishes I have ever ate. This octopus with potatoes and  (broccoli rabe-esque?) greens was flat-out sensational. Every component was perfectly prepared and seasoned by the cook at Quinta dos Murcas, Ana Maria. (Dessert was equally memorable, especially if you like old port. And life.)

Octopus has always been an interesting dish to pair with wine. Usually I think seafood=white wine and, with this un-sauced octopus, figured white wine would be the way to go. The octopus, however, was quite nice with the Quinta dos Murcas Reserva. I think because octopus has a nice meaty texture, and especially because of the charred bits. When I mixed the octopus with a bite of greens, white wine was the way to go. I couldn’t think of a better way to wrap up our last full day in Portugal, and not just because of the breathtaking scenery and memorable food and wine, but also because of the great new friends along the way: 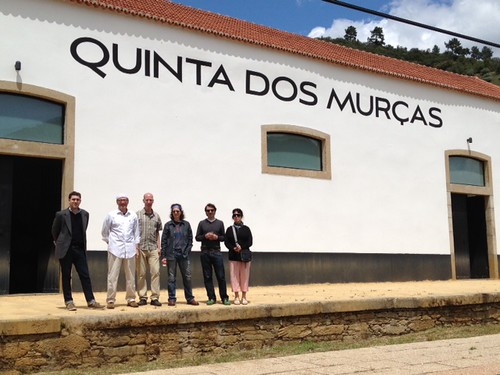