Drinking Wine at the Toronto Airport 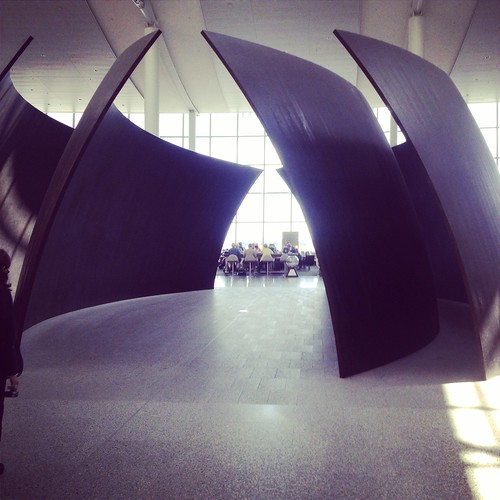 Spending a few hours on a layover at Toronto Pearson International Airport and thirsty for some wine? I hear you, and recently got the chance to plunge into some Canadian wine terminal-side. My experience began at this cool sculpture by Richard Serra pictured above, a threshold you pass to gain entry into a world of endless tables and counters with one thing in common: they all have tablets (iPads) bolstered and propped up directly in front of you. Tap and swipe away, perusing your food, drink, and entertainment options.

Is this a terrifying testament to handing our lives over to staring at screens, with tablets looming and leering like the birds in Alfred Hitchcock‘s, uh, “The Birds”? 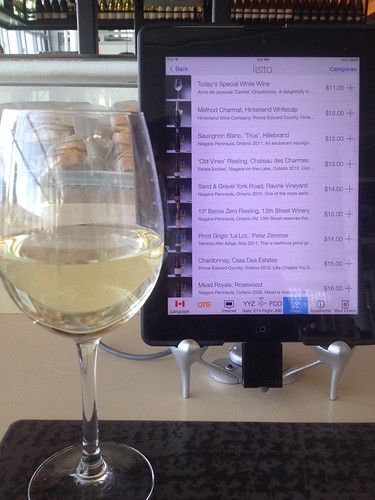 Or maybe you welcome our electronic overlords? Especially when they bring you wine and food with astonishing speed. (Ordering from an actual human being? Also an option.)

I had a very nice white wine from the Niagara Peninsula, the 2011 Trius Sauvignon Blanc, at a place called Fetta. The wine was a great match for a surprisingly good dish of roasted cauliflower, which I enjoyed along with a vegetable-laden panini. A fine antidote to the greasy, heavy glop so prevalent at airports. And especially welcome when you’re about to be on an airplane for 9 hours.

For some reason I started flashing back to being at Chicago’s O’Hare airport in the 1990s, when I was in my early 20s. I’m pretty sure you could still smoke in this bar called something like the Sports Page or Press Box? Maybe it had a horse/greyhound OTB-themed name? (I googled it it to no avail.) This was the kind of place full of businessmen and women about to embark on some godforsaken company trip (myself included) and attempting to knock back as many drinks as possible before boarding. 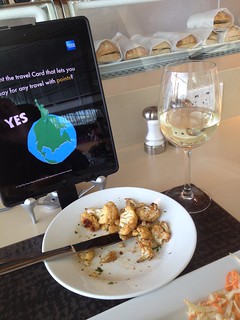 What I recall about airport bars (and gates) is that they once were a place where I had many pleasant conversations, staring with a “Where ya headed?” and ending up turning into something quite revealing if not confessional. Hell, we were never going to see each other again. And I couldn’t Facebook friend them or whatever. So why not spill your guts a bit?

Is this turning into some “Simpler Times” type of nostalgic rant-lite? Well, I don’t feel rant-y about it, just a little wistful. Maybe I’m mourning  one of the pleasures of travel and one of the fewer and fewer pleasures of being in an airport: the intersection of so many people from wildly different circumstances, sharing a word, a joke, or just commiserating.

Anyway, back to keeping my head above the clouds and taking time to stare out the window every now and then. 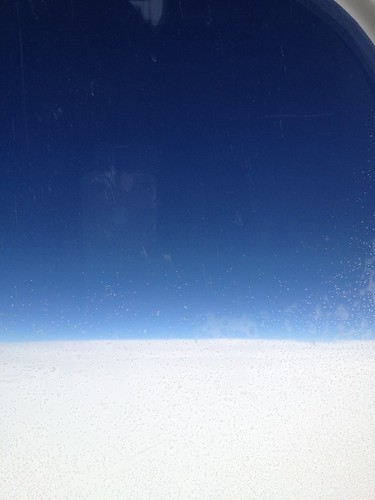