Geyserville, CA: Discovering Valdiguie and the Best Pizza Ever at Diavola 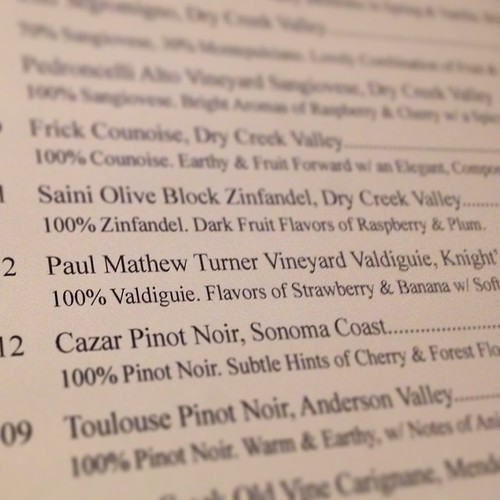 When contemplating Geyserville, CA, my thoughts initially turn to wine. But now it’s focused on the best pizza I ever ate, which you can find at Diavola. OK, I still think a lot about wine. And one of the things I love about Diavola is that while you are waiting for your pizza to emerge from the brick oven, you can peruse a wine list full of unusual suspects from the surrounding California wine country.

My eyes settled on the 2012 Paul Mathew Vineyards Valdiguie. It was a grape unfamiliar to me and sounded cool, so, what the hell? Turned out to be a perfect pizza wine. I did not notice strawberry nor banana, but it was a light and refreshing red. It’s a grape that used to be known as Napa Gamay. Which makes sense, as it reminded me of the most famous iteration of Gamay: Beaujolais. And, lo and behold, this Valdiguie is made using a process called “carbonic maceration”, common among easy-drinking Beaujolais. I won’t go all Mr. Wizard on you, just know that carbonic maceration makes for a gulpable wine. My only quibble with Diavola is that I’d like the wine to be served slightly chilly. 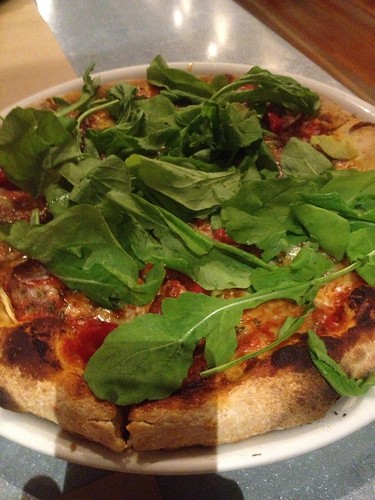 Pardon the iPhone shadow. Was in a hurry to get eating!

So here’s the pizza that wins my highly coveted, highly subjective “Best Pizza Ever” award. What makes it so superlative? Well, everything but it starts with the crust, duh. It’s not soggy nor soupy in the middle. If you eat it quickly (how could you eat it slowly?) you can actually pick up a slice. It does become a fork-and-knife affair by your, uh, fourth or fifth slice. The toppings on the eponymously named “Diavola” are noteworthy: roasted red peppers, provolone, arugula, and housemade meatballs with pine nuts and raisins. Normally I am opposed to having a salad atop my pizza, but enjoyed the peppery bite of the arugula. And the meatballs are sliced thin, so they don’t go rolling into your lap or, worse, onto the floor. (Would definitely put the five second rule into place for that occurrence.) Bonus: there is a little spicy kick, a perfect amount of heat. I die from pleasure.

Reading the notes from Winemaker Mat Gustafson about the Valdiguie on Paul Mathew Vineyards’ website, I came across this comment:

By all rights it should have been ripped out years ago and planted to Cabernet Sauvignon which would be much more profitable for the owners. I am very thankful that hasn’t happened.

Double disclosure: This meal was sponsored by my Mom, who wonders if I am physically capable of consuming any liquids or solids without first photographing them. Also, when I say “Let’s keep wine weird” I am channeling Randall Grahm of Bonny Doon Vineyard ‘s keynote speech at the 2012 Wine Bloggers Conference: