I Finally Get to Know Jameson Irish Whiskey 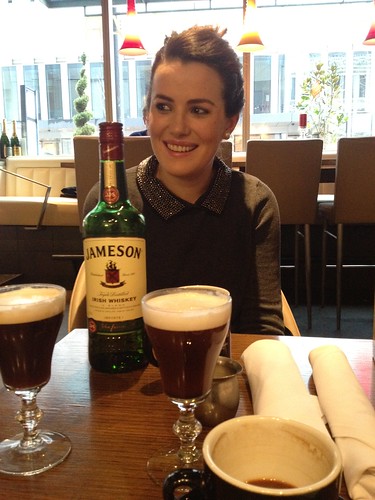 One Irish coffee is not enough.

What, you think this was some self-indulgent post where I talk about myself in the third person? Don’t worry, that’s not gonna happen. (Yet.) I’m talking about Jameson Irish Whiskey, my namesake. What the hell took me so long to get to in touch with someone from the distillery and get the straight (no chaser) scoop about Jameson? Pictured is Sibéal Bird, Jameson Irish Whiskey Brand Ambassador for WA, OR, and (oddly) MN. Not only did we taste Jameson Irish Whiskey, but we also tried a couple Irish coffees while chatting at Fonté Cafe and Wine Bar. The good folks at Fonté Coffee got to work experimenting with different coffees and preparations to find the best brew for the ultimate Irish coffee. (More to come on that subject.) They fed us, too, so we didn’t wander the streets of downtown Seattle with nothing but Irish coffee in our system.

My first questions for Sibéal were simple enough: What is Irish Whiskey? What makes it distinctive? The biggest takeaway I got from my questions is triple distillation. “Normally Irish whiskey is triple distilled for smoothness,”  Sibéal explained, “but there are exceptions to the rule. All of the Jameson Family is triple distilled.” Which is good, because I like my whiskey like I like my wine: silky. Jameson was also at the forefront of Irish distilleries using both malted barley and unmalted barley in the concoction of water and grain (called a mash bill) that eventually produces the whiskey in your glass. This was a case of necessity being the mother of invention, as the effects of a 18th Century British tax on malt were being felt by distillers. Outrageous! So the enterprising Irish distillers got around that tax by using unmalted barly to make whiskey. Today it’s a blend of both, with the malted barley contributing biscuit flavors while the unmalted barley adds creaminess. 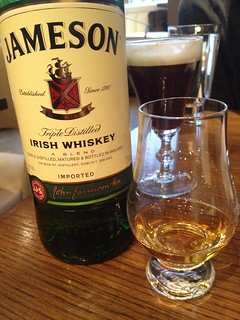 And while Jameson makes a ton of whiskey, Sibéal notes that they “control everything from grain to glass.” Which she can certainly appreciate, as she grew up on a barley farm in Ireland. (Sounds like she was born to have this job, no?) The important point is that the making of Jameson is not just an everybody-in-the-pool free-for-all. This quality control shows when you sip Jameson neat, but certainly you can blend it into cocktails. Even if you’re not a mixologist, try a few simple concoctions. Sibéal likes Jameson with lime and ginger ale (even giving a shout-out to Seattle’s own Rachel’s Ginger Beer as a great partner with Jameson) and also recommends trying it in a Manhattan. And can you pair Jameson with food? Absolutely! Two suggestions from Sibéal caught my attention (and appetite). In Seattle we are awash in smoked salmon; try some with the Jameson Gold Reserve. And next time you order a steak, or grill one at home, pour yourself a little Jameson 18 Year Old Limited Reserve. Jameson also is a great addition to a glaze for ham or your favorite sauce for chicken wings.

All this talk about Jameson got me thinking about how it became to be my name. I’ve heard the story before, but I asked my Mom to send me the entire story. Here’s what she had to say: “I wanted to name you after my dad. Unfortunately, two one syllable names [James Fink] do not work together. One day I was thumbing through a magazine and saw an ad for Jameson Irish Whiskey. It was an ‘aha’ moment. The spelling was perfect because it was like saying you were the son (or in this case grandson) of James. I had always seen the name spelled Jamison before.”

The Redbreast robin is the only bird that sings in the Irish winter.

We also sampled a special treat, the Redbreast Single Pot Still Irish Whiskey. Aged 12 years, it gets its spicy notes (which recall the Christmas cakes Sibéal would enjoy back home) from the pot still and is best enjoyed as an after-dinner sipper. And though it’s not named “Jameson,” Redbreast is a product of Irish Distillers Ltd., which was formed in 1966 when John Jameson & Sons, John Powers & Sons, and Cork Distillers (Paddy) joined together. After the Redbreast was enjoyed, I asked Sibéal for some advice on where to eat in Dublin as well as a couple places to visit if you have some extra time. She was more than happy to pass along a few suggestions:

If you’re looking for a day trip from Dublin, visit Wicklow, and while you’re there tour Powerscourt Estate. Have a few days? Check out West Cork and the Ring of Kerry.

Now are you thirsty to visit Ireland? Tell ’em Jameson sent you.