Is it Fine to Filter Wine? 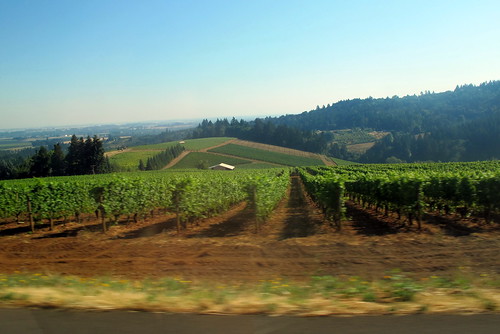 I first met Erath Senior Winemaker Gary Horner while on a trip sponsored by Ste. Michelle Wine Estates. And while I had a fascinating (and tasty) time sampling wines from various vineyards, grape vine clones, and vintages, I was most intrigued by his thoughts about filtering wine. Specifically, that he was a proponent of the process. I have been weaned on a steady diet of wine thought that looks at filtering (as well as process called “fining”) as something that strips away essences of a wine that make it unique. Gary was kind enough to continue the discussion over e-mail, and dive in a bit deeper into the meaning of filtering and/or fining wine. [Thought swirling through my head: Do you rebuke a chef for straining a sauce? “You’ve strained out the flavor!” OK, enough of my crude, random analogies; I’d benefit from some filtering. I’ll let Gary do the talking.]

I see numerous wines that proudly state “unfined and unfiltered” on the label. Why are wines filtered? And how do you respond to the notion that when wines are filtered, “filtering out flavor” is the result?

Gary: If done properly such as with a cross flow filtration, filtering selectively removes particles without altering flavor and aroma. If done poorly using traditional techniques, such as with filter pads, the wine can suffer. The selectively removed ‘particles’ may be comprised of substances such as potential wine spoilage microbes (yeast and bacteria) suspended solids such as dirt, grape skin and stem matter, and insect remains (sounds gross but it is after all, Nature). Some particles will settle out with time yet many remain suspended in the wine even after extended periods of aging.

My lack of tolerance for suspended particles is that they lend a tactile sensation to the wine that to various degrees detract from the wine’s essence. Think of it as drinking silty river water. The suspended silt is not the water; it is a passenger that clouds interpretation.* 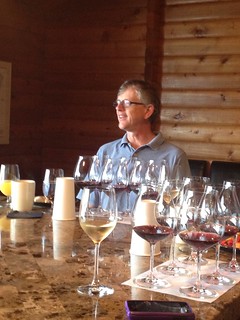 Gary Horner, Senior Winemaker at Erath, in the Dundee, OR, tasting room.

Fining, like filtration, is another process that consumers may see on a label but may not be quite sure what it means in relation to the wine that ends up in the bottle. Can you give a general description of the process?

Fining has a broader spectrum of action that can modify flavor, aroma, color, tannin and help settle certain suspended particles. Whereas filtration is a mechanical process, fining involves electrochemical interactions between the fining agent and the intended target. Many fining agents are complicated proteins. Egg whites, gelatin from various creatures, ox blood (the old days in Europe), milk, sturgeon air bladder….. The list goes on. Other fining agents are for removing unstable proteins. They tend to be naturally occurring clays. In the right hands fining can work wonders. I am not against fining and have used it in certain situations.

Along the same lines of my first question, does the fining process remove components that add to the distinct signature of a wine?

Fining can alter a multitude of compounds in wine. The wine will be different after the treatment and that is the whole intent. Wines of distinction are made using good judgment and there are times when properly applied fining plays a valuable and elevating role.

Gary’s final thoughts were not in response to any specific question, but rather a philosophical summation of the issues surrounding my questions and his answers. He concludes:

There is a great deal of aged dogma out there, carryovers from a different time. We have advanced our understanding of grape growing and winemaking in so many ways. Unfortunately some individuals are just a little behind in reformulating outdated beliefs. I also feel that there are producers unwilling to openly discuss their use of newer ‘non-traditional’ practices for fear they will be judged in a negative manner. Ironically, they may be inadvertently blocking the path leading to recast beliefs and acceptance.

Vineyard photo courtesy Christopher Porter. And much thanks to Gary for his thoughtful and thought-provoking answers. I look forward to seeing this issue discussed in the comments section. Please chime in.

*If you want to get a little geeky with the wine in your glass in regards to filtration, Gary continued his answer by suggesting you conduct the following experiment:

There is a subjective way in which you can attempt to verify if the wine in your glass has been filtered. Remember times when you have been in a movie theater when the room lights got turned off and the only illumination was an intense beam of light coming from the projector room to the big screen. Like most folks, at some time in your life you turned to look back at the projector and noticed you could see stuff floating through the air near the margin of the beam and the surrounding blackness. You may recall a similar situation when a ray of sunlight shone into a dimly lit room.  The floating ‘stuff’ we call ‘dust’. Google ‘domestic dust’ sometime. Not appealing reading I’ll guarantee. So how does this relate to wine in our glass?  Apply a bright focused beam of light to the bottom of your glass of wine while you look down at a slight angle from the top of the glass. It is important that the light is focused and not just diffuse light such as from a house lamp. A pen light works well for this.  It will take a little practice. You may benefit from dimming the room lights to aid in the observation. Don’t expect to see particles the size of dust. These wine particles are microscopic. If you are successful you will see what appear to be variable degrees of haze creating the beam effect. The haze (beam) is light bouncing off the tiny particles. Properly filtered wine will not have a beam since there are no particles to reflect light.