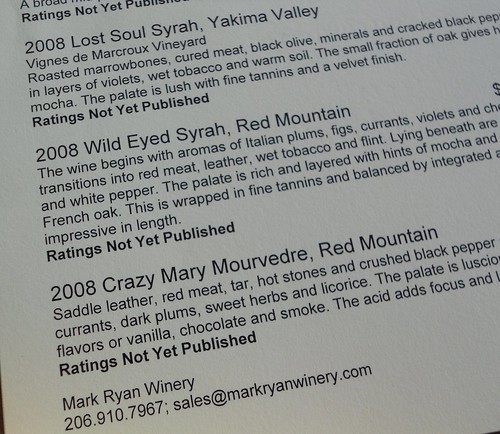 I can’t say that I get too excited about $30 Washington Viognier, but there are people out there who want it and I’m more than happy to sell it to them. I do, however, have to say something about the 2008 Mark Ryan Crazy Mary Mourvedre. Mark’s version got my attention; this is a grape that I think has some serious potential here, if it hasn’t already shown it via Rhone-style pioneers like McCrea. The Crazy Mary is certainly reminiscent of a Bandol, and the scorching heat of Red Mountain can mimic some of the climactic conditions you find in southern France where Mourvedre thrives. (Though they say that Mourvedre likes to “see the ocean” and Red Mountain is a long way from the Pacific.) I’d probably get Tempier for my money, but I’m just a glorified bag boy. If you are a fan of Washington wine (with $ to spare) and Rhone-style reds, break out of your Syrah rut and get this wine.