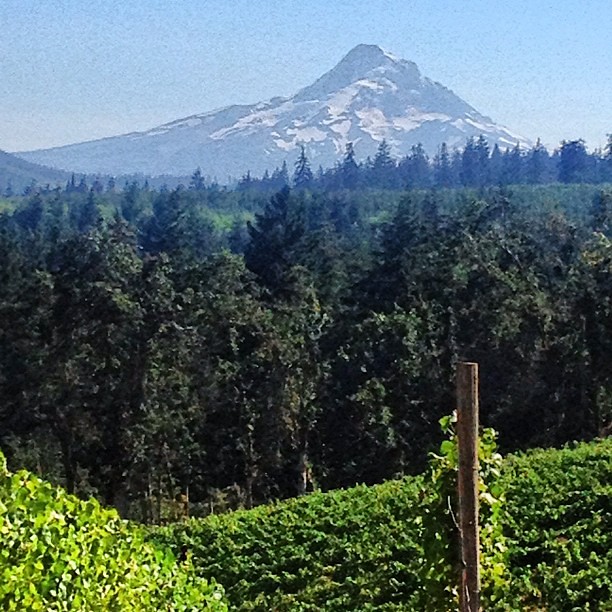 I recently returned from the Wine Bloggers Conference in Portland and knew part of my experience there would entail a bus trip to Oregon Wine Country. But where in Oregon? One of the highlights of the conference is when almost 400 wine bloggers pour out of the hotel, boarding buses to a destination unknown. You see, we have no idea where we are headed until the bus is in motion and there is no turning back. 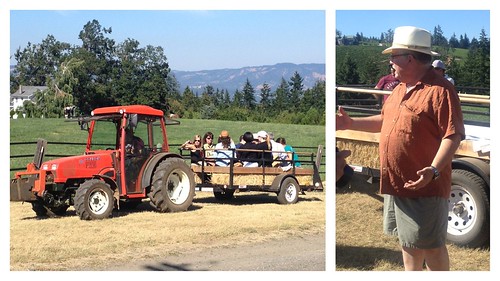 We arrived at Phelps Creek Vineyards and met by the affable Robert Morus, Winegrower and President. And, like no other vineyard tour I have been part, went on a hay ride to ascend to the upper reaches of the property. I quickly slathered on some sunscreen and donned a baseball hat to protect my pasty Seattle pallor from the blazing sun, and we were on our way.

And when we got to our destination in the vineyards…what a view! The photo at the top of this post was snapped from where we marveled at Mt. Hood. We were greeted with wines from a handful of  producers eager to pour their wares from the Columbia Gorge region:

After braving the sun and huddling in the available shade, we headed back to the winery for an unforgettable dinner prepared by Din Din Supper Club & Catering. I figured we were in for something memorable based on the passed bites we enjoyed in the vineyard, but Team Din Din really knocked it out of the park. And naturally, there were some good wines to sample alongside each dish. 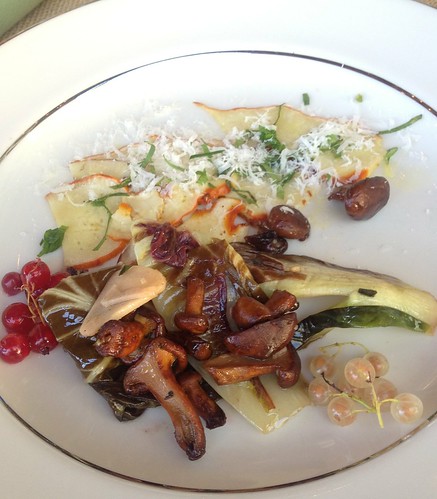 My favorite pairings started with the first dish we were served: Lobster Mushroom Carpaccio with Lovage and Sauteed Chanterelles with Treviso and Sakura Ridge Pickled Currant. Wowzers! I really enjoyed this dish with the 2010 Viento Gruner Veltliner. With all the competing flavors on the plate, it managed to not get in the way, shifting gears with each earthy/bitter/pickled bite. The home team, Phelps Creek Vineyards, showed well in the next course: Sturgeon and Cocozelle Zucchini Salads with Gem Lettuces. I liked that Robert had made a point of having us eat sturgeon rather than the more familiar salmon, as the nearby Colombia River is famous for sturgeon. The creamy salad and meaty sturgeon paired fantastically with the 2010 Phelps Creek Estate Reserve Chardonnay, which had just the right amount of oak to support but not overwhelm. 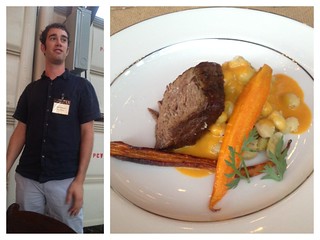 Viento made another appearance in the menu with their 2011 Barbera. A youthful wine, it happened to be made by someone quite youthful himself: Winemaker Rich Cushman’s son, Peter. It was a lively, refreshing red that was great with our second (!) meat course: Braised Beef Shortrib with Fresh Pocha Beans and Heirloom Pepper Carrot Sauce. (Please excuse me while I look up what exactly a pocha bean is.)

We then took a break between courses to admire how the view of Mt. Hood had changed while the day turned into night: 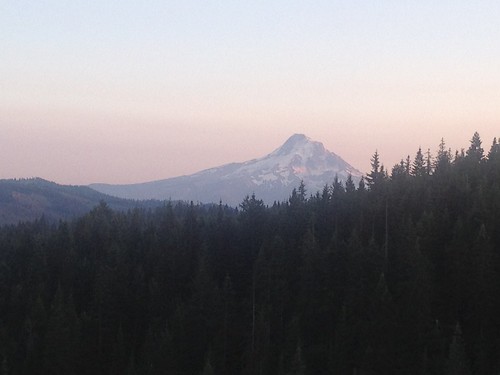 We left after dessert, took a return hay ride to the bus, and headed back to Portland. Big thanks to Phelps Creek Vineyards for hosting, all the Columbia Gorge wineries for being generous with their time (and wine), and the sensational job done by Din Din on a meal that had two other courses I didn’t even mention. (Ok, must mention the dessert: Fresh Fern’s Edge Goat Cheesecake with Peach Licorice Coulis. Which was pretty much perfect with the light, gorgeous 2009 Viento Gewurztraminer Ice Wine.) And hooray to everybody on Bus #1! I know we were glad to end up in the Columbia Gorge and I don’t think anybody would disagree with me when I say it was an afternoon and evening we won’t forget.

Note: The Columbia Gorge Wine Region also has vineyards and wineries in Washington as well. Explore the Washington side! And if you want more Gorge, I got you covered. 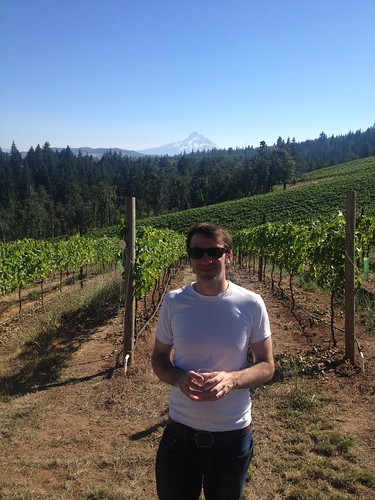