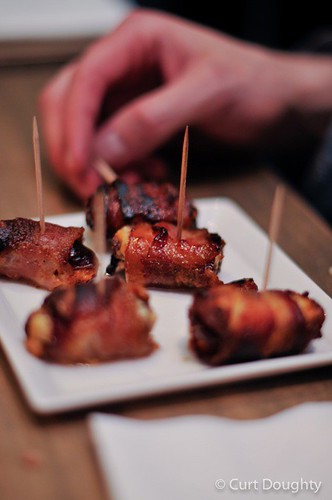 I can’t help but think of Cool Hand Luke (“Nobody can eat 50 eggs.”) when I heard about Pintxo‘s challenge to eat 50 bacon-wrapped dates in 30 minutes. That’s three pounds of bacon, dates, and goat cheese. If you are in Seattle and want to enter and/or witness this eating event, it’s part of Pintxo’s 2nd Anniversary Party on Sunday, May 6th.

Probably the best pairing with 50 bacon-wrapped dates would be a large bottle of Pepto-Bismol immediately afterwards, but I started thinking about the best wine to pair with a more modest, tapas-size portion. I was going to say Spanish Garnacha (aka Grenache), which I thought would be not only apropos for a tapas restaurant but also be juicy enough for the dates and hefty enough for the bacon. But the goat cheese through me for a loop. It was time to call in an expert.

I immediately reached out to Melissa Sutherland Amado, from 67 Wine in New York City. Not only is she the Director of Marketing there, but she also buys the Italian white wines and Sherry. And knows a ton about wine, period. Here is what she had to say, which I found surprising because I wish I was that clever and original:

While it may seem blasphemous for the dogmatic approach, Chablis and goat cheese can shine. While the tang of Sancerre is an irrefutable match for young, fresh goat cheese, the surprising nosh of dates stuffed with goat cheese wrapped in bacon changes the context entirely. Try something broad, with acidity to be sure, but also heft. I feel a Chablis such as Gilbert Picq or Patrick Piuze are ideal for this match.

Damn, I may have to inquire about Pintxo’s corkage fee, and roll in with some Chablis. Thanks, Melissa!