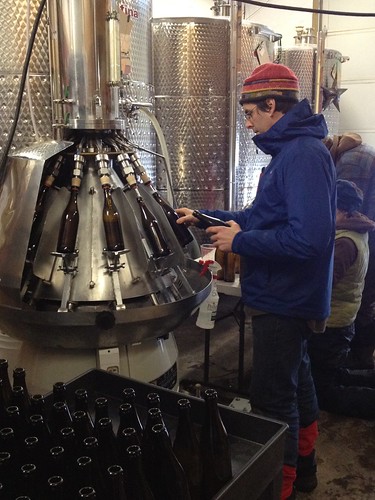 I’ve worked along Keith Kisler at Finnriver, helping produce artisanal hard cider for most of my month on the farm. OK, well I’m not making the cider, but rather assisting with bottling and other tasks that I cannot turn into a catastrophe. Working on the line also gives me a chance to learn more about Keith’s interest in, and passion for, cider. What follows are his responses to some questions that I’ve been thinking about after being here for nearly a month.

How did you get first interested in making cider? Was there a cider you tasted that was your “A ha!” moment that changed your perception of it?

In college my friends and I experimented with homebrew beer making and then that hobby went mostly idle post-college, until moving here to Finnriver where our neighbors Lige and Kay had planted several heirloom and true cider apple trees and exposed us to the virtues of hard cider. The farm crew and I started making hard cider in 5 gallon batches. Some were wonderfully complex and rich in tannin with a full and round mouthfeel. But some of those first batches were better suited for vinegar making….

But my first “a-ha!” cider was a bottle-conditioned cider made by Lige. It was light, bubbly, with a bracing acidity. It was clean and refreshing and perfect for the moment, on that summer evening while BBQ-ing at a friend’s house. The next cider that caught my attention was Wandering Aengus’ Dry Oak cider.  It’s got a subtle oak spice and the balance of acid and tannin was perfect. 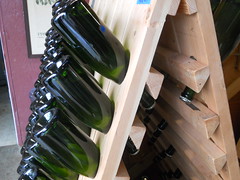 What issues and challenges do you face being a small, artisanal producer in terms of both production and sales?

Economy of scale. The infrastructure and human power required to produce, market, and sell cider on a commercial scale is extremely expensive. We’ve been lucky in many ways that craft cider is seeing a revival, especially in the Northwest. The increased popularity of cider over the past few years has allowed for the growth of our company. Our initial business plan was very modest and simple, but it quickly became apparent that it would take a significant jump in production to cover the costs of equipment and labor required to grow our capacity so that it could be economically viable. But even with our growth we are still a very, very small producer in the grand scheme of things. Whenever my wife is describing our cidery to someone and she uses the term craft or artisan scale I always feel compelled to remind them that we are truly a nano-cidery. 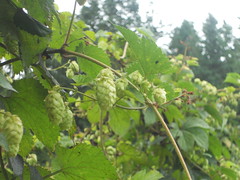 Tell me a little about the cider conference you will be attending in Chicago and what you and other artisanal producers hope to achieve.

This is the 2nd annual national conference geared specifically to commercial cider producers. We’ll focus on how to define our growing industry so that hard cider has a strong footing within federal code of regulations. The code currently doesn’t relate in many ways to how many of us are wanting to produce, market, and generally conduct our businesses. Much of what is written is geared towards beer or wine, or is serving the few very large domestic cider producers or importers. And many times the code just doesn’t make any sense for modern production. Also, we as a growing number of craft scale producers are poised to have an impact if we build a strong, cohesive foundation on which to propose changes, and for those regulatory bodies to take notice. Strength in numbers… 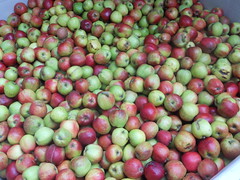 How does sustainability and organic agriculture impact and inform your cider making?
I’ve come to making cider from the perspective of being a farmer, and having grown up on a farm in Eastern Washington. I naturally lean towards a low intervention approach to cider making and appreciate the inherent virtues of the fruit and the basic elegance of fermentation. 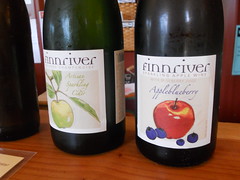 Are you able to tell me about any new ciders/wines that will debut this year?

We are excited to introduce a couple of seasonal limited release products this year. I can’t really say exactly what they will be because one, that would spoil the surprise, and two, things are in a constant state of evolution around here. I will say we are actively working on a few new ciders, and some format changes are in the works….

A big new development is we will be taking over a label from Red Barn Cidery, whose cider-maker is retiring after a very successful and important cider career. Finnriver is now fermenting, under Drew’s watchful eye, the regionally popular and award winning Fire Barrel Cider. The cider will be released in late spring under our brand. We’re really excited to be carrying this cider into the future and to be working with Drew to ensure its quality and consistency continue for years to come. 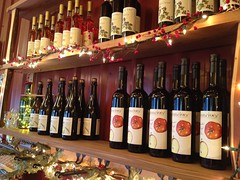 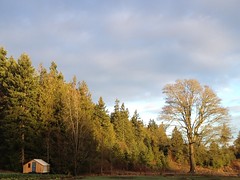