The Tiniest of Shrimp with Star Anise and White Bordeaux 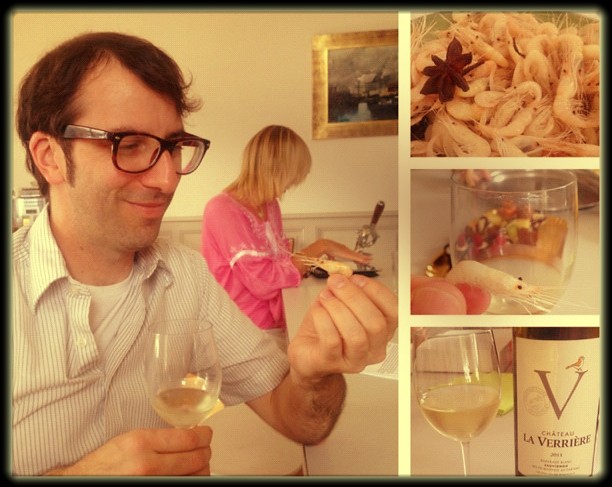 Nothing cures jet lag like a glass of White Bordeaux and a bowlful of very, very tiny shrimp with star anise. My first afternoon in Bordeaux on a media trip sponsored by Planet Bordeaux was spent gathered round a kitchen counter at Chateau Saint Barbe. It sits a (literal) stone’s throw from the Garrone river:

These tiny shrimp were accompanied with an assortment of white wines, including a couple rosés (hell yeah!), but the wine I kept gravitating towards was the 2011 Chateau La Verriere. It’s a 100% thirst-quenching, punchy Sauvignon Blanc that takes its foot off the gas pedal before crossing the line that would render it overly assertive and agressive. (Yes, your wine can be too assertive and aggressive. It’s like people.) The La Verriere was snappy, with a touch of richness to give it some distinction. And it was distinctly excellent with shrimp after tiny shrimp. (Jeez, is this post going to turn into some sort of Forrest Gump/Bordeaux mashup?) 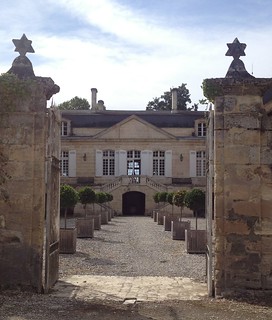 The shrimp (here I go again…) were subtly flavored with star anise, and that slight licorice quality was perfect with the Sauvignon Blanc. Talk about a food and wine combo that kicked my jet lag to the curb! Well, at least temporarily. I was very pleased at how my first few hours had unfolded, as I’d already tasted a few exciting, easy-drinking, and well-priced white wines and rosés. And drank them with a chatty and lively group. Though from the outside the 18th Century chateau was an impressive and slightly imposing site, it was, on the inside, no different than any other home where people get together: we all ended up in the kitchen. Which I think was not only a testament to our hosts and my fellow wine writers, but also indicative of the kind of friendly, easy-going, simply pleasurable wines at hand. 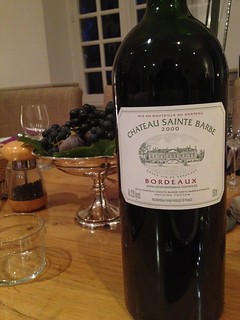 Postscript: We returned to the Chateau for dinner (hooray!) and were treated to a magnum of 2000 Chateau Sainte Barbe. It’s pretty much the definition of why you age Bordeaux: a decade-plus in the bottle had rendered this red wine a softened, luxurious pleasure. No rough edges, and the distinctly non-fruity secondary characteristics that only the passage of time reveal had emerged. We also got to sample the 2007 and 2008 vintages, of which I preferred the latter. Just as special was a traditional dish lovingly (and painstakingly) prepared: lamprea with leeks in a red wine sauce. Huge thanks to Lucy and Antoine Touton for this memorable meal and their utterly charming and generous brand of hospitality.