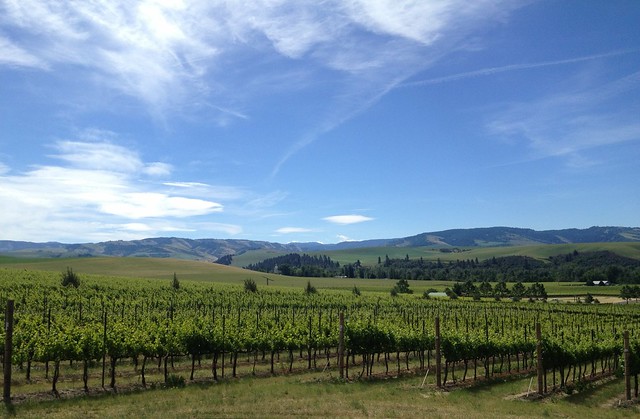 I’ve been in Walla Walla for five days. So what Washington wines have impressed me? I’m glad you asked.

A few came from a tasting that took place in the Mill Creek Vineyards (pictured above). Not only was I mightily charmed by this verdant corner of the Walla Walla Valley, but also by a refreshing pale and elegant 2013 aMaurice Cellars rosé, made from Syrah, enjoyed under a shady tree. Also notable from aMaurice? A 2013 Viognier, rich and aromatic without getting oily and perfume-y, the latter duo pointing to tendencies of sub-par examples of this white wine.

I also really dug the 2011 Figgins Estate Red. It took a while to open up, but once it did a very elegant Bordeaux blend emerged. Hide in the cellar for years or give it many hours of chill (but not chilly) time in the decanter. 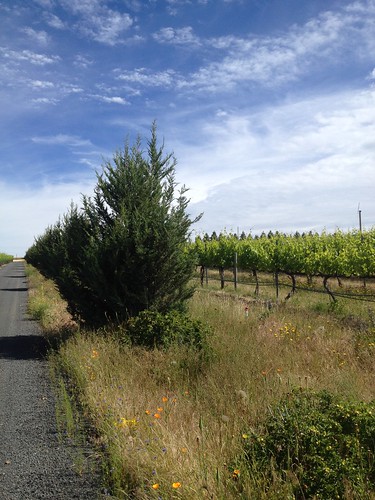 Are these all the wines I have something to say about? Hardly! This first round wrapped up just a small portion of a day on this journey, a media trip sponsored by the Walla Walla Valley Wine Alliance. Heck, we hadn’t even had lunch yet! Speaking of….

Brasserie 4 was the spot for a lunch giving love to lesser-known grapes. (Sidebar: shout-out to the refreshing and palate-cleansing salad with fresh herbs, peas, walnuts, and strawberries that was very lightly dressed.) I’m not much of a red wine drinker when it comes to hot, sunny days, but was really charmed by the 2012 Morrison Lane Cinsault. If sitting in the shade or outside after the sun went down, this wine would fit the bill. Stick in the fridge for about a half hour and serve it cool.

For white wines, Paul Gregutt was there with a duo of his Waitsburg Cellars 2013s. The Cheninieres is a steely, dry Chenin Blanc while the Chevray has a more richness from time hanging out in a barrel, along with just the slightest touch of sweetness. Though nothing that stands in the way of refreshment.

Finally, after a brief respite and a pit stop for Claritin and a 12-pack of Tecate, it was time for the day’s main event: Vintage Pour. This was a really cool event, as all the wines were from 2007 or earlier. Hey, remember that 2012 Cinsault? Well, Morrison Lane had the 2005, which was still alive and lively.

Buty Winery had a one-two punch of 2006 red and white: the Rediviva and a Semillon/Sauvignon Blanc. The latter was one of the best examples of how this White Bordeaux-esque wine is capable of aging.

It was also really cool to meet Drew Bledsoe, who was pouring his 2007 Doubleback Cabernet. I have to say seeing Drew was really cool, because over ten years ago I met him when working at Randolph Wine Cellars in Chicago. A sommelier sent him to the shop because we had quite a collection of cult Aussie Shiraz. I got to help him (along with a big assist from one of the owners, Brenda) pick out a bunch to add to his cellar. I retold this encounter to Drew and was stoked that he remembered, especially since at the time I had crazy dyed hair. (This was pre-Facebook so, sorry, no photos of said out-there hair.) Also, I am reminded how awesome Brenda is, and how she got me hooked on Soave.

Anyway, back to W2. So I can’t believe I never had anything from Bunchgrass Winery. Paul over at Full Pull calls them “insider gems“, and now I’m no longer on the outside, looking in. The 2006 Cabernet Sauvignon was a treat. 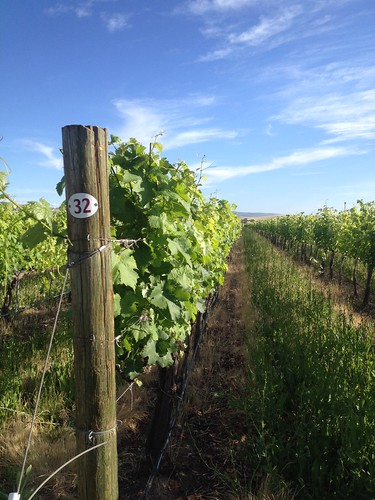 Perhaps you’d like something with a bit more age on it? OK, Seven Hills Winery went into the vault like the Grateful Dead and brought on something with plenty of life: the 1999 Syrah. It need no help on the way from glass to my palate, and was a fully mature but far from tired red wine.

Finally, I finished with the 2007 Sleight of Hand Cellars Levitation Syrah. Winemaker Trey Busch pointed out that this vintage was the first version of Levitation including fruit from Les Collines Vineyard. And since that vineyard was right outside the door from where we were tasting, I thought, “Geez, I could drink it right in that very vineyard block.” So I asked for the number of one of the blocks.

Like a dummy, I thought Trey told me Block 32, but I got my numbers transposed and it was actually 23. Anyway, Trey, I meant well. And BTW, 32 is not so shabby-looking. So I’m going to lobby Trey to come up with blend in honor of my blunder: The Transposer.

But all blunders aside, a great visit to Walla Walla, with some eye-opening wines. It’s made even this Cubs fan have some optimism about…anything. 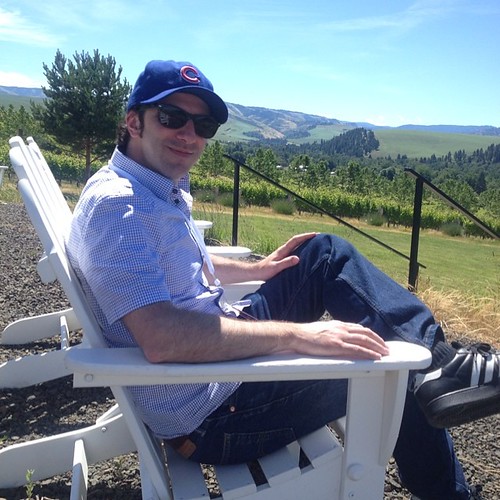 I have been made aware that I am sorely lacking in the glass of wine department in this image.