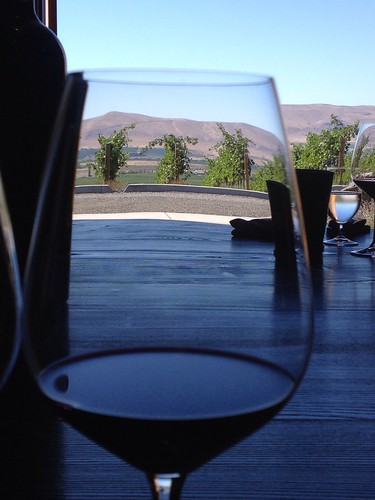 When visiting Col Solare, producer of a most notable Washington State wine, you don’t have to look far to see what’s going to end up in your glass. On an intensely sunny August day in the Red Mountain wine region in Eastern Washington, I visited the winery thanks to Saint Michelle Wine Estates (SMWE).

Winemaker Darrel Allwine was our guide as we tasted through a selection of five vintages of Col Solare. Darrel had recently been promoted to Head Winemaker a few short months ago. (Congratulations, Darrel. You also have the greatest last name in the business.)

Here’s a snapshot of my thoughts on each vintage we sampled. The history of Col Solare, in a a bottle at least, dates back to 1995, when the wine was made at Canoe Ridge Vineyard. Now, Col Solare has its own sweet digs. The wine is a Cabernet Sauvignon-heavy blend, usually 60-80% Cab. (For more on the blend, check out “What’s That 3% Syrah Doing in Your Wine?“) 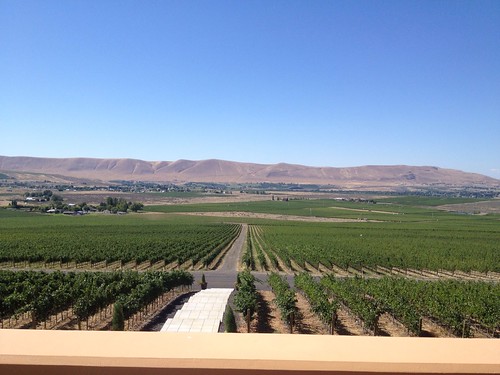 Col Solare is a joint production between SMWE and Italy’s famous Antinori family. And while the wine is a 100% Washington state wine, the Antinori Italian roots are evident in the spirit of the winery. When it comes to a wine, Darrel explained, if the Antinori family is going to be involved it must have these three things: 1) intensity, 2) ageability, and 3) authenticity. 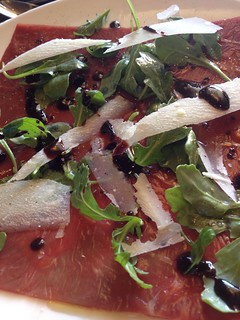 I could certainly attest to items 1-3 as we tasted through each vintage. I also noted that, for wines coming from the hot Red Mountain region that typically produces powerhouse reds, each vintage of Col Solare skewed toward the smooth and silky rather than beastly with tannin. Which probably made it taste great with this elk tartare, created by the the Executive Owner and Chef of Walla Walla’s Olive Marketplace Cafe, Jacob Crenshaw. A brawnier red wine would have obliterated the pure flavor of the raw elk; thankfully, most of the vintages of Col Solare know when to make like Ginger and Fred with food, rather than stage-hogging like Travolta’s Tony Mareno moving to “You Should Be Dancing“.

In a final nod to the Italian spirit pervading Col Solare, like many wineries of that nation, they make grappa! What else are you going to do with all those leftover grapes? Sure, they gave up their juice, and their skins contributed to the flavor and color of this Washington State wine. But there’s still work they can do. You know I didn’t leave empty-handed. (Note: no clandestine grappa consumption took place in this vehicle.) Just as I like collaborating with other bloggers, whether we’re talking about garam masala caramel corn or anthropomorphized cupcakes, I appreciate seeing two folks with similar interest create something memorable together. Especially when its something I can drink and/or eat.