Wine on Airlines II: Sparkling Wine Not Bringing Me Down 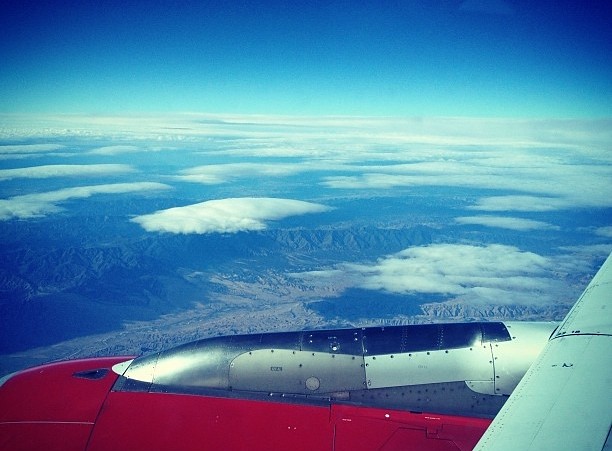 I previously had a fine experience when it came to wine on airlines, courtesy of a cheerful glass of a French Vermentino as well as a sparkling wine, Henkell Trocken, on Lufthansa. (Details with a side of Will Ferrell and Graham Greene.) And now, armed with the knowledge to ask for sparkling wine if I don’t see it on the cart (thanks, Kelly Magyarics), I would make sure to speak up during my next in-flight beverage time. So when heading out from Seattle to Frankfurt (and ultimately Lyon for a Beaujolais to Chateauneuf-du-Page trip with Wines of France, where I drank Beaujolais Blanc while wearing an apron) I seized the opportunity to enjoy a sparkling wine from the Henkell family, Menger-Krug.

I didn’t catch which bottle it was, and didn’t want to be that guy asking to see the bottle while getting death stares from dozens of people ready for a couple drinks and a strong desire to pass out over the Atlantic and wake up in Germany, but it had extra richness and was a bit toasty-flavored and golden-colored. A nice contrast to the light-and-lively Henkell Trocken. 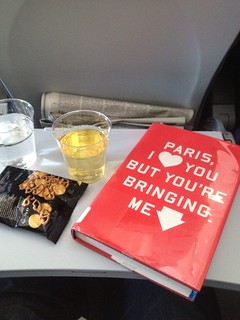 No, I don’t have a damn Kindle.

I had a very entertaining and appropriate book to read while drinking that Menger-Krug, too. Though I wasn’t going to be in Paris save a cameo at the airport, I found this book at the library before I departed: Paris, I Love You But You’re Bringing Me Down by Rosecrans Baldwin. It’s the story of an American working (for an ad agency) and living in Paris for a spell. But this is no flowery, everything is amazing-style fluff. It’s a candid look at the pros and cons of the expat lifestyle. Paris turns out to be full of charm, confusion, agony, lust, history, good and bad food, puzzling bureaucracy, and pedal-powered, late-night charm. Also: smoking and wine.

Baldwin is funny, observant, and perceptive as hell as he navigates the people (and city) of Paris while at work and leisure. Anyone who has a mildly torturous relationship with a large urban area will relate to Paris, I Love You But You’re Bringing Me Down. You love your city (some days more than others, some days a bit less) for its faults, quirks, highlights as well as its unique spirit, landscape, people, and places.

The title on the book is so…noticeable, I was wondering if any English-reading Parisians were on the flight and thinking, who the hell is this guy and what the hell is that book about? Or, to look at it in a more magnanimous manner, it certainly could be a good conversation starter. While drinking wine. Trapped on an airplane for eight hours.

Tags: menger krug, Paris I love you but you're bringing me down, Rosecrans Baldwin, wine on airlines